Our diverse, global portfolio helps U.S. businesses manage risk and continue to support the U.S. economy. In an increasingly interconnected world, diversifying risk is more important than ever. Global reinsurance—also known as insurance for insurers—is used to diversify risk through both domestic and foreign reinsurers to ease the financial burden during catastrophic events by reducing exposure for insurers. Because a hurricane in Florida is unlikely to happen at the same time as a tsunami in Japan, a global portfolio lowers the risk of writing insurance and enables insurers to underwrite more policies at lower prices for consumers. 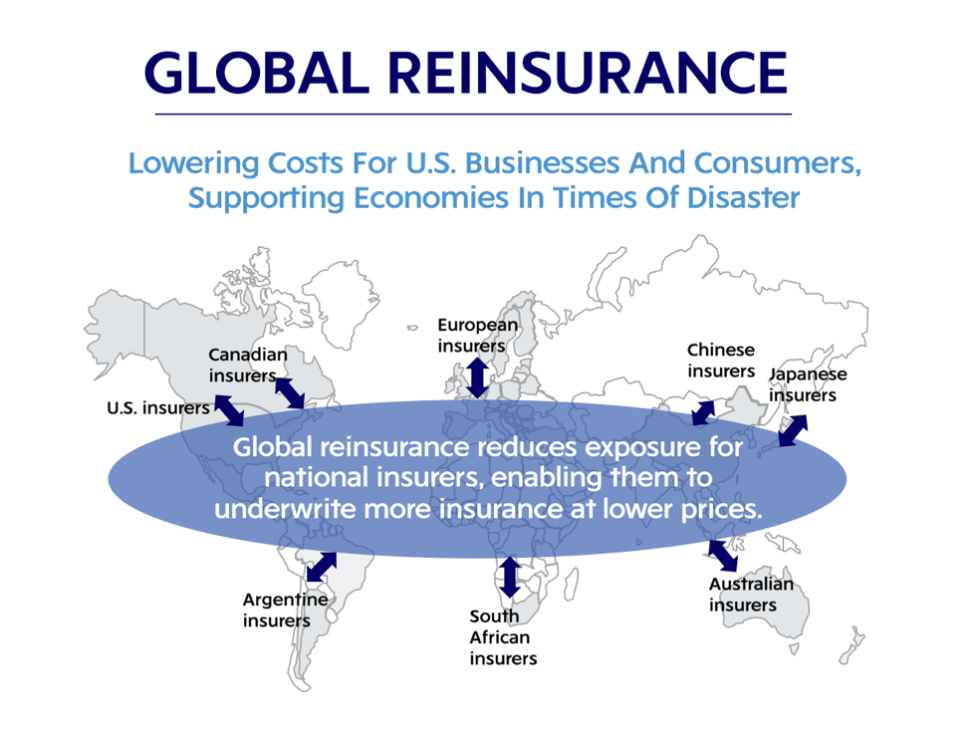 However, some domestic insurers want only global affiliate reinsurance transactions to be subject to different tax rules – despite being opposed to the same rules in foreign jurisdictions. So, what is actually being proposed here? A group of domestic insurers is advocating for the treatment of reinsurance diversification transactions between global parents and subsidiaries to change so that when a domestic affiliate pays premiums to its global affiliate, those premiums would no longer be considered a cost of doing business, and thus no longer deductible. However, this exact same transaction would still be deductible for a domestic insurer or with a non-affiliated insurer. Not only is this proposal out of line with how the rest of the world treats reinsurance, this new tax rule would slant the playing field in favor of domestic insurers, picking winners and losers in the industry. The result: American businesses and families will shoulder more risk from natural catastrophes, cyberattacks, and terrorism.

In a recent op-ed, Dennis Kerrigan, Chief Legal Officer for Zurich North America, explains how a global affiliate tax would hurt American consumers and calls on Congress to reject these protectionist proposals. He’s not alone. Insurance and agricultural commissioners across the country are joining insurers and federal government officials in opposing these proposals. The tenants of a tax on global affiliate reinsurance—less growth, more risk—are counter to the goals of tax reform and have no place in legislation.

A Tax On Global Reinsurance Would Increase The Cost Of Insurance And Reduce Growth.

A Tax On Global Reinsurance Would Make The U.S. An Outlier On Tax Policy, While The Rest Of The World Is Working To Diversify Risk Globally

To Protect Businesses And Families.

A Tax On Global Reinsurance Picks Winners And Losers, Rewarding Only Domestic Companies At The Expense Of Globally Active Firms – Both Domestic And Internationally Headquartered – That Serve High-Risk Areas, Creating An Uneven Playing Field.

The information in this publication was compiled from sources believed to be reliable for informational purposes only. Any and all information contained herein is not intended to constitute advice (particularly not legal advice). Accordingly, persons requiring advice should consult independent advisors when developing programs and policies. We do not guarantee the accuracy of this information or any results and further assume no liability in connection with this publication, including any information contained herein. We undertake no obligation to publicly update or revise any of this information, whether to reflect new information, future developments, events or circumstances or otherwise.